The Sisters/Nuns at Nonnatus House

​Every Sunday evening as the clock strikes eight, the Sisters of the Anglican Community of St John the Divine take a vow of silence. For one hour each week, they sit in quiet contemplation, huddled in a circle in the living room of their shared house.
But this is no religious ceremony. Instead of prayer books, the Sisters clutch mugs of tea and plates of custard creams. In place of the altar is a table strewn with sepia photographs, letters and biscuit crumbs. And in the corner stands a huge flat-screen television, tuned to BBC1, where the most sacrosanct of rituals is about to begin.
Sisters Margaret Angela, Christine, Elaine, Ruth, Ivy, Shirley and Teresa have more reason than most to watch Call the Midwife, the heart-warming Fifties drama that has captured the imagination of more than nine million viewers. The series is based on the memoirs of Jennifer Worth (played by Jessica Raine), a lay midwife who lived and worked with these very nuns in Poplar, east London, more than 60 years ago. And each week they tune in to reminisce about the happiness and heartbreak of midwives bringing the miracle of life to the grimy streets of London’s East End.
The real-life Nonnatus House is now in Birmingham – and the likes of Chummy and Sister Evangelina are nowhere to be seen – but the seven remaining nuns of this small Anglican order are relishing their new-found fame. 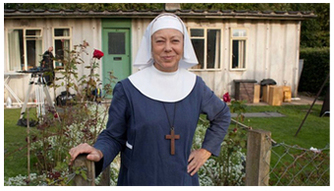 Sister Julienne is the Sister-In-Charge at Nonnatus
House.
Deeply religious, she is also profoundly practical and confers dignity on her patients through her sensitive, non-judgmental approach. She is often called upon to mediate between her fellow sisters when they quarrel - this is an almost  exclusively female world, and her tact and gentleness are essential to its  happiness.

Jenny Agutter who plays Sister Julienne says about her character: “She finds  everything she is involved with really interesting and people are rather
extraordinary. Nothing is ordinary or mundane, life is amazing 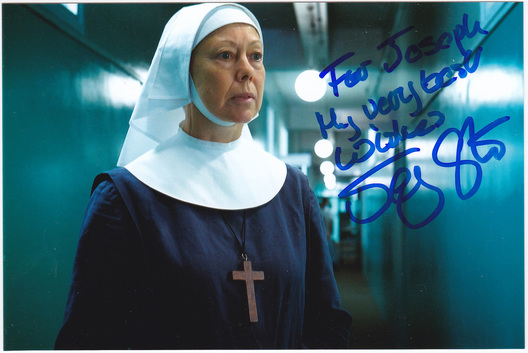 Sister Hilda arrives from the Order’s mother house in Series 8 and has been described as a “jump-in kind of person” who is already familiar with the East End. She and Sister Frances are sent to become midwives at the understaffed Nonnatus House.
“Sister Hilda is older and more experienced,” Woolgar said. “She was in the WAAF during the war so I think that probably led to some of those decisions because by the end of the war she had joined and obviously during the war you see some horrendous things. Also, she has been a nurse before.
“She is quite jolly and out there and enthusiastic and wants to help.”

​Sister Mildred is described as “a forthright and indefatigable sister from the Order,” Sister Mildred is a bit of an unlikely nun. She arrives at Nonnatus House at Christmastime with four Chinese child refugees in tow from her trip to Hong Kong, who she is taking to the Mother House’s orphanage to meet their adoptive parents. Sister Mildred has a big personality and a sense of humour, and is also extremely chatty. 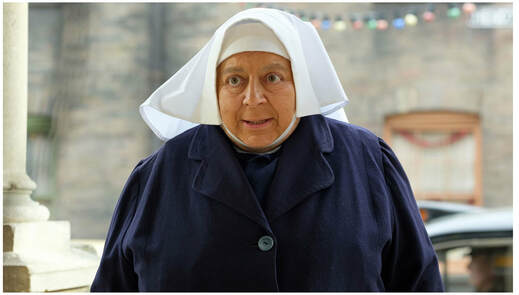 The Sisters at Nonnatus House