The Nurse's and Midwife's at Nonnatus House

​Nurse Jenny Lee arrives at Nonnatus House in 1957, at the  age of 22, completely unaware of the world she is about to enter Believing she’s accepted a job with a small private hospital, it comes as somewhat of a surprise to Jenny to find she’s moving into a convent. Furthermore, the deprivation of the East End is a huge culture shock for the young woman who has enjoyed a privileged upbringing in the Home Counties, and spent time in Paris before training as a nurse. However, although initially shocked by the conditions in which her patients live, Jenny comes to accept the material limitations of the world in which she works, and to love the people who  must live there.
Jessica Raine who plays Jenny says about her character: “She’s young, she’s 22, and she sees all these amazing life stories happening in front of her. She’s  constantly learning and re-evaluating her own way of seeing the world. I really  like that, I like people who can change their opinions and she does that during  the course of the series.”
________________________________________________________________________________________________

​Nurse Trixie Franklin is a bright, glamorous girl in her  mid-twenties who is already living and working at Nonnatus House when Jenny arrives.
All fully-fashioned nylons and lush red lipstick, Trixie loves jazz and dancing, smokes Sobranie cigarettes and, it’s fair to say, is a bit of a flirt. She has a much more outgoing disposition than Jenny, but the two share the
sense  of adventure in their work and become firm pals.
Trixie has recently been promoted to 'Acting Sister' at the Tuesday Ante-natal and Baby clinic. Her professional success is mirrored by her blossoming love life and she is delighted when Poplar’s dashing young vicar Tom Hereward asks her to be his fiancé. However the relationshipo breaks up and Trixie loses control of her 'drinking' habits and is becoming an Alcholic.
In Series 5 Trixie regains control over her drinking habit and regulary attend AA meetings and starts her own Keep fit classes.
​________________________________________________________________________________________________

​Camilla Cholomondely-Browne, otherwise known as Chummy, is the daughter of a prominent family who has found her way into nursing and midwifery by a circuitous route.
Eternally good-humoured and monumentally kind, Chummy is crippled by lack of self-confidence. Her great height and physical clumsiness plays its part, but a loveless childhood spent in boarding schools has made the greater impact. An adept midwife, she is hampered by acute shyness and - perhaps more crucially – a  complete inability to ride a bike. Chummy soon wins the hearts of her colleagues, but her struggle for self-belief will threaten to capsize her.
Miranda Hart who plays Chummy says about her character: “She comes from a very upper class background and she has decided that her calling from God is to be a midwife so she comes to the east end to join Nonnatus House much to the horror of her viceroy father and her upper crust mother.”
​

A no-nonsense nurse hailing from Leeds, she's dedicated to midwifery.
Phyllis is a private district nurse and midwife, arriving in 1960 as temporary cover for Sister Evangelina who is on sick-leave.
She is incredibly forceful and not one to confirm to society's expectations. She promptly distinguishes herself at Nonnatus House by arriving in a Morris Minor and announcing her vegetarianism.
Phyllis is the chalk to Sister Evangelina's cheese, and they clash immediately. She shares a room with, the much younger midwife, Barbara, much to Barbara’s horror.
​ 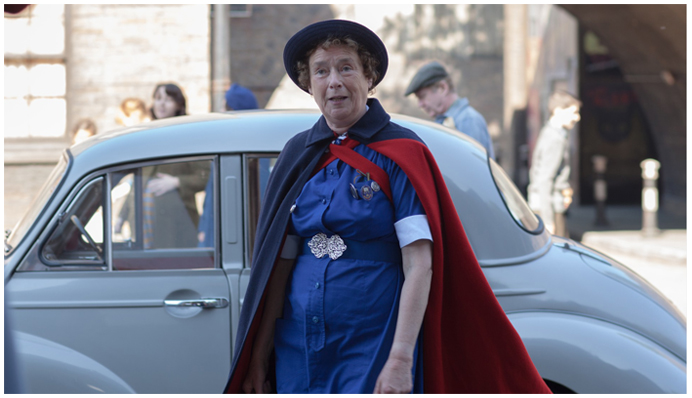 Patsy is mid twenties, tall, elegant and favours slightly tailored clothes. She joins Nonnatus House to help cover the work load in Jenny's absence.
Patsy has boundless energy, and is prodigiously strong, never blinking in the face of hard work or physical privation. Her robust common sense and frank manner prove rather a tonic at a time when Nonnatus House is feeling overworked.
However, despite her no-nonsense approach she is slightly more guarded than she first appears, and is not entirely easy to get to know.
Patsy and Trixie become room mates and enjoy many a late night drink and a cigarette.
​In series four Patsy falls in love with Delia.
​​

The Midwife's at Nonnatus House